One Year In at New Designers London 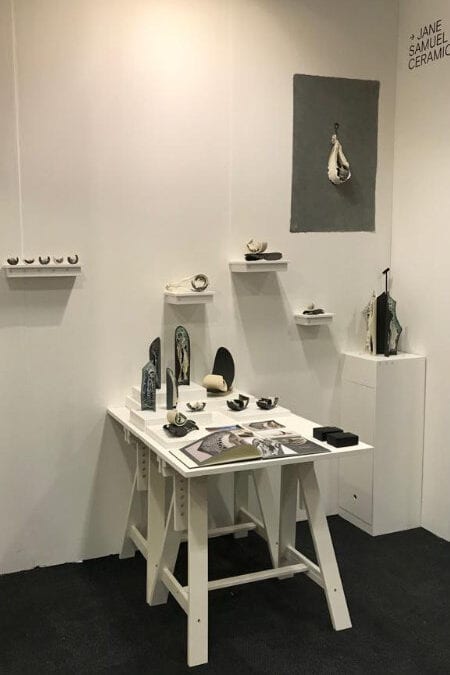 Towards the beginning of this year I was selected to exhibit at One Year In at New Designers London which took place during the last week in June.

This was my launch, One Year In at New Designers, a show for creatives who are in their first year of business, with new business cards, postcards, image book and of course my work in hand I headed down, (or is it ‘up’?!) to London for the start of this adventure, grateful to have Peter at my side.

The months and weeks before had been very busy. My time was filled with making a new collection, marketing and designing my stand, weeks of preparation all came together on the 24th June in the Business Design Centre in London. Nervous? Yes, however I was definitely excited, what would this week bring?

Set up spread over two days, meeting other creatives was fabulous and many feeling as I was which was very reassuring. Such lovely people and hopefully new friends that I will meet again at other shows. Over the week I met and spoke with some amazing people. Galleries and organisers of some of the really big ceramic shows such at Ceramic Art London as an example, plus conversations with journalists, both during and prior to One Year In.

Paul Bailey, editor of Emerging Potters, an online magazine wrote an article about One Year In and I, yes Jane Samuel, was featured in it!  Emerging Potter is written in association with Centre of Ceramic Art, (CoCA) York and Aylsford Pottery in Kent. If you fancy reading the article it can be viewed on issuu.com…..Emerging Potters

I would like to thank all those who were involved, in particular, Emily of Evan James Designs and Patricia van den Akker of The Design Trust who curated and advised respectively. One Year In at New Designers was most certainly an amazing experience. I was thrilled to have been selected and will take from this many constructive things to help me grow and move forward in the world of ceramic art.